“I wonder why no one called the police about the rocket launcher? God knows my neighbors usually report it if I so much as fart in my backyard.” ~ Sherrilyn Kenyon, Infinity

It was an uneventful day.  I looked outside through my window, and all I saw was grey and wetness.  I worked the entire day and didn’t leave the apartment until evening when I remembered to go downstairs and pick up my mail.

With everyone working from home and staying home all day, we are suddenly forced to endure the sounds of all of our neighbors’ movements.  My upstairs neighbors have always been fairly loud, their footsteps sounding as though their feet are fifty pound cinderblocks.  I was able to tolerate it in the past, but now, to hear their footsteps all day, everyday, my tolerance level decreases with each passing day.  Apparently other neighbors are also becoming irritated as I saw this in the elevator on the way downstairs: 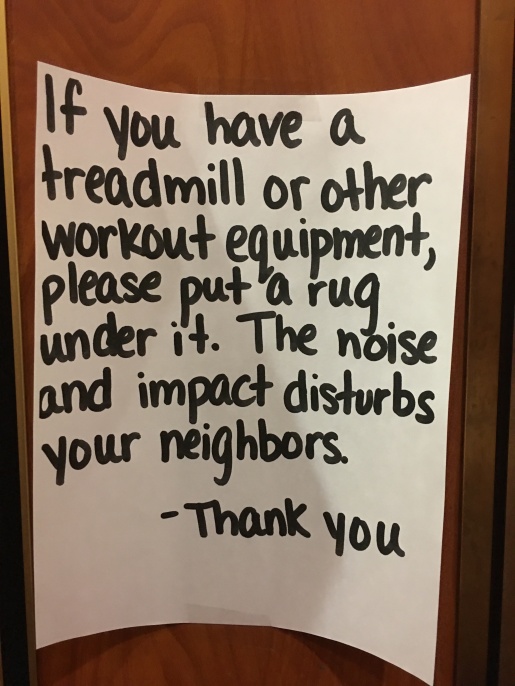 Two  years ago, one of my neighbors felt that G was too thin, and so they decided to call child protective services (CPS) to investigate me for child neglect.  So a CPS agent came to my apartment, rifled through my kitchen pantry and refrigerator, and informed me that one of my neighbors was afraid that G was malnourished.

It was a debacle to clear my name with CPS.  I had to submit all of G’s pediatric and school records to prove that I was not neglecting my child and that I was properly feeding her.

After several visits and multiple submissions of health and academic reports, the final verdict was that G is simply a skinny kid.

I never found out who called CPS to investigate me.  I was really angry and upset that a neighbor would wrongly accuse me of such a thing, but I suppose it happens right?  What gets me is those stories I see of children who are repeatedly abused or even murdered by their own parents – where was CPS in those scenarios?  I have a child whose body frame is naturally small, and I get CPS called on me.  Unreal.

One thought on “Aantal Acht”