There’s nothing unusual about seeing drunks walk around aimlessly at 6:00 in the morning here in New York. In fact, I’ve found that it’s actually quite a normal thing to see around here. There are, after all, no shortages of after-hours bars that cater to those that want to stay obliterated past the 4:00 a.m. closing of the regular bars. I’ve actually found that the streets are quite dangerous between the hours of 5:30 a.m. and 7:00 a.m., as all the drunks are either drunkenly driving home or walking (staggering) home as night turns into day.

So, there seemed nothing out of the ordinary this morning for me as I was jogging through my neighborhood and I saw a man stumbling through the streets. He was yelling incomprehensibly to everyone and no one, but I just ignored him and kept on jogging.

However, on my jog back home, I saw that the drunk man had stopped and was yelling at an old Mexican man with a little puppy. As I jogged towards them, I strained to hear what was being said.

“Give me your puppy, old man!” the drunk man yelled.

In fear that something bad would happen and without thinking, I yelled,”What the hell is going on here?!”

“Who the f*ck are you, you little chink b*tch?” yelled the drunk man.

“I’m the b*tch that’s gonna kick your ass if you don’t leave this man alone,” I said calmly, and with much more confidence than I felt.

I’m not sure why, but the drunken man started to walk away. Perhaps it was my intimidating 4’11 frame. Or more possibly, the fact that I had my wolf with me frightened him away. 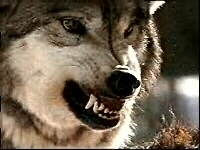